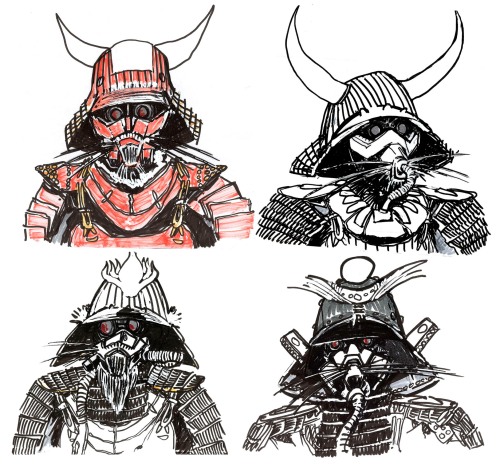 Now these were a lot of fun to do, when I thought about how I would develop the rat army a little further, I went completely in the Samurai way! Having a little more fun with this, eventually I am going to have to really start thinking about how the rest of their body is going to look? But for now, a little more fun!

Posted in Character Development, The Nutcracker 2087, The Rat Horde

The rat army, this is one of the reason I became so interested in actually going through with this pet project, the battle between the rat army and the toy soldiers. Plus of course the main battle between the Nutcracker and the Rat king. Staying with the future theme I wasn’t sure how to go about creating this rat army. So I started with a robot face from an action figure that I have, which kind of resembles a mouse face or a rat face. (In the story they are mice, but when I think of mice I think of pet, or test subjects. Rats are more vicious, meaner looking and they stink) I simply added whiskers, and thought I nailed it, but I was wrong. The German looking helmet, the robot features, too Star Wars. As a friend told me ‘yeah it is a little too Star Wars’ I had to have a little fun with it, and for the heck of it I created Vador Mouse.

After having some fun with various faces, I started to try and really work these robot looking faces to look more like rats of the future. I want them to look like they have been through battles, or a scientist had worked on them – with some brains showing. The one all the way to the left was one of the first ones I started playing with, but the ears look too much like elf ears. The one next to it is more in the right direction with the ears. Taking away the helmet, adding the hair and the ears, but keeping some of the robotic looking parts around the nose and mouth, give it a nice futuristic feel. I haven’t given any of them bodies yet, that is in fact my next step, but I am still having some fun with the faces, and still working on them. More to come soon!